The Charm of Shippoyaki (cloissone) 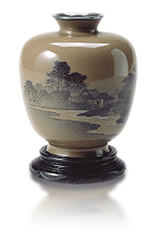 Wired Cloisonne is a product with silver wire implanted in metal and fired with glass glaze. The technique was established by Tsunekichi Kaji in Owari Kaifu-gun (currently Kaifu-gun, Aichi Prefecture) during the Tempo era. Later, with the development of science and technology in the latter half of the 19th century and the growing awareness of arts and crafts, Cloisonne's technique and design also developed rapidly.

In the art world, when the movement of Japonism took place mainly in Europe and the United States, Japan's Cloisonne arts at the World's Expositions held around the world became highly valued worldwide as a uniquely Japanese craft for their artfulness and exquisiteness, unrivaled by others.

The charm of Cloisonne as a fine piece of art that fascinated the world as part of the beauty of Japanese culture has permeated not only among art lovers in Japan and overseas, but also as the decoration of various items of daily life.
The sparkling appearance peculiar to Cloisonne and the depth of the overlapping colors catches the heart of the person who sees it.

Since its establishment in 1880, the Ando Cloisonne Store has won many awards overseas and domestic locations such as World Expositions. In the year 33 of the Meiji era, we were appointed as a purveyor to the Imperial Household Agency.
The origin of “Shippo-yaki” (Cloisonne)

The origin of Shippo-yaki (Cloisonne)

“Cloisonne” is derived from the “seven treasures” spoken of in the Buddhist scriptures. The type of jewel varies depending on the Buddhist scripture, but in the Lotus Sutra, it is said to be "gold, silver, lapis lazuli, clam shell, agate, maie (a type of shell) and pearl".
Around the Momoyama period, “Cloisonne ware” seems to have been named because it is as beautiful as the seven gems